This page contains short facts about me, my interests, photos, drawings, some work that I have made, my education and other things.

Name: Meikel Jungner
Born: May 25, 1977
Living in: Åtorp, Sweden
Facebook: www.facebook.com/meikel.jungner
Profession: I have just finished a new education, learning Web Development in .NET (2019-2021) at EC Utbildning in Örebro. My latest job was at Metodicum AB where I worked for 16 years (2002-2018). I was also a radio host at www.sydnarkenytt.se/radio where I presented my favorite music (2013-2018).
Graduate from "University of Örebro" (2001), where I learned Business Economics and Information System Development/Informatics.
Interests: music, TV, football (known as soccer in North America), internet, comics, drawing...
Religion: none (Atheism)
Political party/sympathizer: Piratpartiet (Pirate Party) 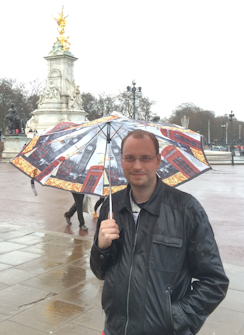 Some photos from trips I have made or concerts/shows I have attended. Mostly older stuff at the moment.

One of my interests has been drawing. Even though the last twenty years or so I have not taken the time to draw, so most of the drawing examples here are quite old.

Some other work & accomplishments

Older stuff. For example, the 3 artist websites below was made around 2003-2007 some time.

Back to my home page.